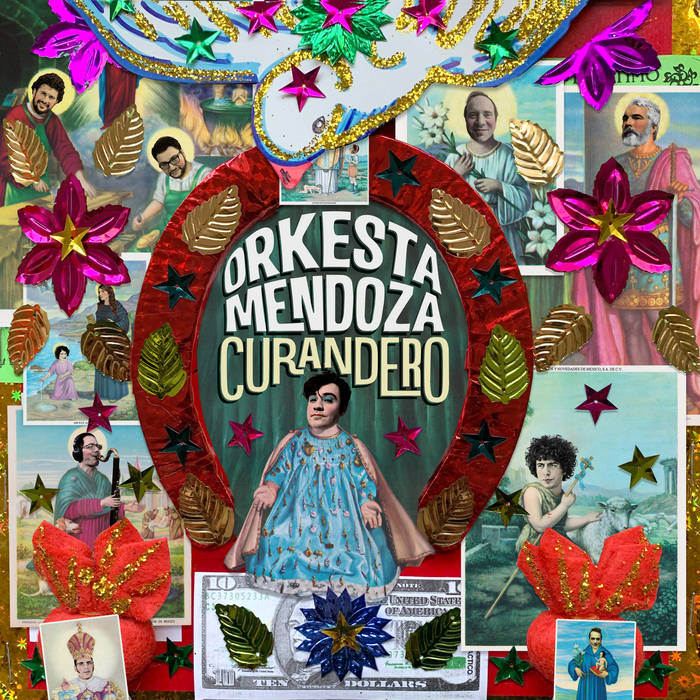 Sergio Mendoza (a longtime member of Calexico) grew up on both sides of the US/Mexican frontier. On the band’s 3rd album, “Curandero,” his musical melding of that experience explodes from the speakers.

“Mixing 60s rock styles with traditional Latin stompers, the US-Mexican band are both experimental and rousing.” – The Guardian

Sometimes, things fall together as if they’re simply fated to exist. Orkesta Mendoza found that; as soon as the songs began to flow for Curandero, their second album for the Glitterbeat label, the stars seemed to align and everything was composed, recorded and mastered in just a few short months.

“We did it so fast that the result was light,” explains band leader Sergio Mendoza. “We went along with it without a lot of thought or planning.”

It all came quite naturally. Yet the road to following up 2016’s lauded ¡Vamos A Guarachar! didn’t start out so smoothly. In 2018, the band began work on new material, but it didn’t quite click.

“I went on tour, then went back into the studio in August 2019,” Mendoza recalls. “We wrote all new songs. Going fast and having a different approach meant we weren’t so serious, some of the tracks are very playful.” It shows; there’s joy in every note. The music flows as if it had been waiting to appear. It crosses and re-crosses that fluid border between Mexico and the United States, mixing rock and pop with ranchera and cumbia alongside snatches of mariachi horns. And hovering over everything is the spirit of ‘60s boogaloo.“Boogaloo has lyrics in English, Spanish and Spanglish,” Mendoza says. “Joe Cuba mixed Latin rhythms, Soul and R&B together and made something new. The R&B part was a real reference point for me, but the rhythm was obvious in the percussion and the handclaps.”

Mendoza was born in Nogales, Arizona (USA) but grew up across the border in Nogales, Sonora (Mexico). Rock arrived in his life after he moved back to the US, when he was still a young child. Inevitably, the different styles simply blended in his mind and fit together in his life.

“Yeah, I’m definitely a Rock’n’Roll fan,” he says, “but it’s in my DNA to have Mexican and South American styles in my music. In my head, though, Orkesta Mendoza is definitely a rock band.” That deep love of rock crosses time as well as space. “Eres Oficial,” for instance, looks back to the 1950s to evoke the ghost of Buddy Holly in its insistent guitar chords, and the production that puts an emphasis on the drumbeat. The song’s catchy; it sticks in in the brain, with a classic, spare feel.

“Much of the album has that more stripped-back sound,” Mendoza admits, “and the space to let the music through makes it more radio-friendly.”

That’s also very apparent in cuts like “Head Above Water” and “Little Space.” They bristle with hooks and immediacy and the kind of Latin flavours that would have been perfectly at home on old AM radio. They breathe.

“With “Head Above Water,” I was thinking about The Police,” Mendoza says. “You can hear it if you listen; we mixed the drums a bit louder, with the snare up front, the way Stewart Copeland played. And “Little Space” actually started out like The Jam. I wanted Nick Urata from Devotchka to sing on it, I thought he’d be perfect, and I sent him the track with my guide vocal. What he sent back was completely different, but it was so cool that I ended up reworking the song around what he’d done. So what began as The Jam ended up as vintage Mexican Cumbia.”

It hadn’t been Mendoza’s intention, but Curandero quickly became an album filled with guests.

“Originally it was going to be just the band, but it turned into our collaboration album! As we recorded, I kept hearing different voices for the tracks. I knew I wanted Nick, then Joey Burns of Calexico (Mendoza is a longtime member of the band) was just right for guitar and bass on “No Te Esperaba” which also features Chetes from the legendary Mexican rock band Zurdok.”

He even recruited the renowned Spanish singer Amparo Sánchez, who brought her fiery magic to heat up “Boogaloo Arizona,” a track that could almost be Curandero’s clarion call.

“I’ve known her for about 12 years,” Mendoza says. “We run into her at festivals, and she sang with us in Barcelona. Her voice is maturing in a very cool way. We’d talked about collaborating. I sent her the track and she put her voice on it.”

Curandero has a close, intimate feel, but this wasn’t a band playing together in a room; all the musicians came in separately to track their parts. The consistency of sound comes having the touring band drummer and bassist on most of the songs, and from Mendoza’s production which makes everything seem organic and bright. The music leaps out of the speakers.

Even the album’s sole instrumental, the toe-tapping “Bora Bora,” sounds like it was recorded in a dark, smoky club, with the feel of a soulful big band fueled by the retro, percussive power of Mambo.

“That was inspired by a bar called Bora Bora in Nogales, Sonora, a piano bar we used to go to, a guy playing an organ with a drum machine. Old ladies in their red dresses would be sitting there, waiting for men to show up and buy them a drink.”

That vintage sensibility even takes Orkesta Mendoza back further – all the way to the 1940s on the closing track. “Hoodoo Voodoo Queen” is the Andrews Sisters on a fantasy trip south of the border. The harmonies of Moira Smilie, Carrie Rodriguez and Gaby Moreno sparkle over percussion, pedal steel and glorious, honking sax. It’s a distinctly addictive oddity, and yet a perfect way to end the record, the unexpected twist that bursts like a brilliant bubble to close out the disc. And in its own way, it makes perfect sense beside the rest of the songs.

“You know,” Mendoza says, “I made Curandero based around boogaloo, but really, it was just an excuse to rock out. Boogaloo is the root, but Rock’n’Roll, that’s my love, too.”

Bandcamp Daily  your guide to the world of Bandcamp

MF DOOM is given his flowers, plus appearances from MC Jada Imani and Stanley Ipkuss